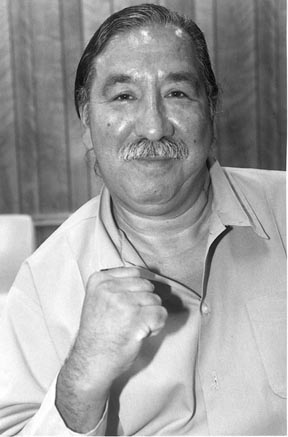 On June 26, 2015 two FBI agents sped on to Pine Ridge Reservation in South Dakota in an unmarked car and initiated a shoot-out with American Indian Movement (AIM) activists.

When it was over, the two FBI agents, and one Native activist, Joe Stuntz, were killed. While there was never any investigation into the death of Stuntz, the FBI began the biggest ‘manhunt’ in US history to capture the AIM members who were involved in the firefight. Two AIM activists stood trial and were found ‘not guilty’ for reasons of self-defense. The FBI then put its focus on Leonard Peltier, who had fled to Canada to avoid the racist US justice system. Using manufactured evidence, the FBI had Leonard extradited from Canada to stand trial for the deaths of the agents. Despite the fact that there was never any reasonable evidence presented in the trial that linked Leonard to the deaths of the agents, and that the prosecutor conceded that "We do not know who killed the agents," in 1977 he was convicted of the two murders and sentenced to two consecutive life terms.

Leonard’s real crime was standing up against the US government for Indigenous people. Today, he is 71 years old and continues to be a symbol of US injustice, but also Native pride and unwavering courage. He has continued to write and speak out from behind prison bars, and is recognized throughout the world for his life-long struggle for human rights.

The following is a letter written by Leonard on his 71st Birthday.

Greetings everyone,
Well, today is another b-day for me — my 71st. I had hoped I would not be here at this age, but that’s not to be. So, I have to take a deep breath and slowly let it out... and prepare myself for yet another day in here.

February 6th marks my 40th year in prison. How many of you know that when I was indicted a life sentence was 7 years? I was sentenced to 2 life sentences, so with good time I have served 6 + life sentences. I suppose all of this time has taken its toll on my body. I have a number of different health issues that come with old age. The one I’m most concerned about is my prostate.

Otherwise, I’m still getting compliments on how good I look for my age (smile). People can be nice and say things that make me feel good once in awhile. But I’m told this so often that I’m starting to believe it (smile).

Hey, did you know that the last time I went before the parole commission (2009), I was denied because I looked young and healthy... and a reason given for denying me parole was that I might be too much of an influence on the young natives? yeah, only in america.

And get this: In October 1984, when the Parole Commission was repealed by Congress, the Commission was given six years to give me a parole date... all of us “old time” prisoners really (those convicted prior to 1984). Yes, this is all true. All you have to do is research it, and I bet you will come away shocked as hell that this can happen in your country. The Parole Commission is the only Government agency that has been repealed and reinstated 35 days later without having to go through the normal congressional channels and signed into law by the President. How does this happen in a democracy?

I’ve been encouraged by things I’ve read recently though. And looking back... It’s been over 60 years, maybe a little longer. I was around 7 or 8 years old when I heard the old People talking about taking care of Mother Earth. But for me anyway, as with all young People, I did not really understand what they were trying to tell us, I guess? But I see today the traditionalists were correct and AIM People were right when we took it up as a rallying cry to the world. Still, when we spoke out against the destruction of Mother Earth, we were called a bunch of nuts. Well, today, it is called climate change, and there are now millions of us crying out against the destruction of our Mother Earth. Amazing, huh? Thankfully I have lived this long and can see we just might win this war. I know it’s not over — far from it — but the world is waking up and talking about it now. So, it can be won in our lifetime.

Well, People, I don’t know how much longer I have left on Mother Earth — or if I will even be around for the next few years — but I always hope and pray that I can be out there to spend my last few remaining years with you. If not, so be it. I have been in here too long to cry now. I just wish for more time to give to my People and to all freedom loving People in the world.

Thanks again for all of the love you have shown me over these 40 years. You have all been worth it.

In the Spirit of Crazy Horse...
Doksha,
Leonard Peltier