On Friday February 26, Fire This Time organized a community forum titled, “A Revolutionary Perspective from the Civil Rights Movement to the African Liberation Movement to Black Lives Matter!” The event marked Black History Month, as well as the 50th anniversary of the Black Panther Party and the Assassination of Malcolm X. Importantly, it also featured Garry Owens, a member and organizer with the Black Panther Party from 1968 to 1972 who has continued to be very active in many different social justice movements.

Fire This Time also published speeches by Malcolm X, Martin Luther King Jr., Maurice Bishop, Thomas Sankara and Patrice Lumumba in a special Black History Month section of February's edition of the newspaper. An underlying objective of both the forum and the special section were to highlight important but often overlooked or glossed over figures in the history of the struggle of the black liberation movement and the fight for self-determination and dignity of black people around the world, as well as understanding of their ideas and struggle for today fight against capitalism and imperialism.

A packed house came to hear Garry as well as Azza Rojbi, a North African social justice organizer from Tunisia and Executive member of Mobilization Against War and Occupation (MAWO), speak and also participate in the following discussion.

Gary outlined his personal history of growing up poor and black in the United States, and the process of radicalization he and many other young black people had in response to the injustice which surrounded them. He became one of the founders of the first Black Panther Party chapter outside of California, and organized against colonial oppression and capitalism as well as for a new and better world. He described the challenges of confronting state repression and institutionalized racism, but also emphasized his continuing commitment to fight for the rights of all oppressed people. 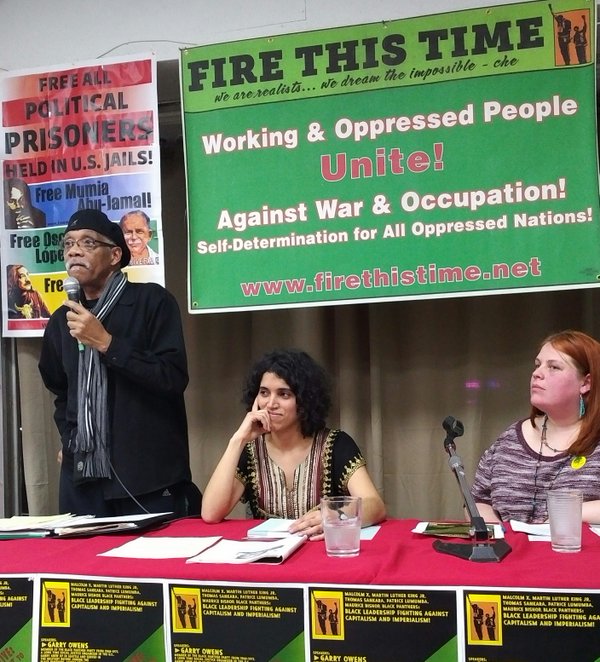 Azza took a historical look at the continuation of black struggle around the world. She drew links between the struggles of African nations for their independence from colonial powers to the current fight today confronting ongoing racism, police brutality, mass incarceration, military aggression and imperialist war and occupation at home and abroad.

While it was clear from both speakers presentations that many of the same struggles black people have faced continue today, they both expressed hope and inspiration in the example of so many black people who have stood up, and continue to stand up, to injustice and demand their rights. Fire This Time was honoured to host Garry, and to share these important examples in the international struggle for dignity, self-determination and a better world.